It should concern everyone that the American election is turning into a spectacle. For better or worse, when a butterfly dies in North Dakota, the stock market crashes in Tokyo. On the other hand, the bigotry and hate that has come welling up from Joe the Plumber and his six pack (one of my staff thought they were talking about abs) should also remind us that, in spite of protestations to the contrary, American society is not some "shining city on the hill" but just as prone to racism (tribalism) as the citizens of Iraq or Rawanda. If Barack Obama loses the election, it will because he is black.

The decline of America is startling in its magnitude and swiftness. As in any group of people, there will shortly be a gigantic orgy of blame assigning. And, as usual, all the people who deserve it, will be let off scot free. But, once again, those at the bottom of society, particularly our African American citizens, will receive both the brunt of the ensuing hardship and the brunt of the blame. I suppose that this is human nature, and maybe we should look at that closer (below). As an example of this, I have heard many times now, particularly from the man who manages my retirement, that the economic meltdown is due to "all those people getting mortages they couldn't pay for." Awesome in its ignorance of the real deceit of wealth.

Objectively, there is only one major difference between a black person and a white, and that is, of course, skin color. Indeed, skin color is the result of the presence of the pigment melanin. Melanin should, by all accounts, be viewed in a positive light:

The photochemical properties of melanin make it an excellent photoprotectant. It absorbs harmful UV-radiation and transforms the energy into harmless amounts of heat through a process called "ultrafast internal conversion". This property enables melanin to dissipate more than 99.9% of the absorbed UV radiation as heat[3] and it keeps the generation of free radicals at a minimum (see photoprotection). This prevents the indirect DNA damage which is responsible for the formation of malignant melanoma.

(As an aside, it sounds similar to the pigments in the retina we discussed on the information thread.)

Not to put too fine a point upon it, but many of my white neighbors probably could do with some melanin since the incidence of melanoma where I live is astonishingly high. (There must be other evolutionary drivers since melanoma is a disease of older people and melanin shouldn't have that much survival advantage, even in equatorial Africa. Maybe it is the other way around, and northern Europeans lost their ability to produce melanin because they needed to metabolize vitamin D.)

Of course whites have melanin too:

So, it actually a question of degree of gene expression rather than an absolute possession or absence of the pigment.

But this slight biological differences between whites and blacks (and there are others) is overwhelmed by what one might term "cultural" differences. When looked at objectively, though, these differences vanish. And they vanish entirely for Barack Obama.

He is an exceptional man. Coming from a humble background, he attended Harvard Law School. In spite of the cromagnon grunters who criticize this as elitism, he is exactly what we need in this terrifying world. But the most admirable thing about this man is that he has never lost his cool during two years of absolutely mind bending campaigning. Never

Back to the discussion. I would propose that racism, while felt to be morally reprehensible, may still be the exacerbation of an innate tendency towards genetic chauvinism. One might draw an analogy with the sex drive. Yes, indeed, all humans have this and, if you believe Freud, it is a much more powerful determinant than we are willing to admit. (I daresay that there is not a day that goes by that there isn't some thinking going on in each and every one of us about sex. Just look at the power of sex in advertising and, at least initially, in the McCain choice of Palin.) Consider what the situation might be in which there were no societal restrictions on sexual activity. Chimpanzees and apes give us a good idea.

In the same way, the fear of otherness is, in my way of thinking, one of the primal urges. Some would say that it is inseperable from aggression, which is really another way of saying self preservation. Looking at it that way, we have our entire genome arrayed against the genomes of others.

While society has done an awful job of sexuality (no thanks to the Church making it a Great Big Sin, when actually it was to protect the property of kings, can't have bastards running around), it has done an even worse job with race. You see, the problem is that we live in Alan Greenspan's America (for a great discussion of his connection to Ayn Rand see this Kos diary RIP John Galt. Also, we shouldn't forget Herbert Spencer.). Everything, and I mean everything, is subjected to "market forces." Lo and behold, these market forces are just the primal driving power of the genes in each and every one of us. And yes, evolution causes change. Society changes. Is this progress? Furthermore, in unfettered evolution there are a lot of casualties just like in a crashing stock market (my tanked 401(k) just said hello.)

In nowhere more than racial issues does the power of the genetic market forces dominate and obliterate even the smatterings of the alleged moral code. In spite of Obama's exceptional credentials, many a person has told me (of course not in public) that I'm not going to vote for "that" man (a term used to great effect by McCain in one of the debates.)These are people that go to Church on Sunday and wouldn't harm a flea, but have bought into the sterotype of the otherness of the black man or woman.

This really raises a quandry for people like myself who see no transcendence in the moral code. I am very practical about it. Morality is the thin glue of civilization. Without it, as much as I despise it, all would be chaos. But there are different slants on this strait jacket. The very ease with which people are able to, on one hand, brag about the greatness of the "American Way" (whatever that is), and our democracy, and on the other condemn a black man only for having a little extra pigment in his skin, is only explicable if this is outside the moral sphere.

It is only explicable if it is right there in the red of tooth and claw.
Posted by Dr. C at 8:48 AM 1 comment: 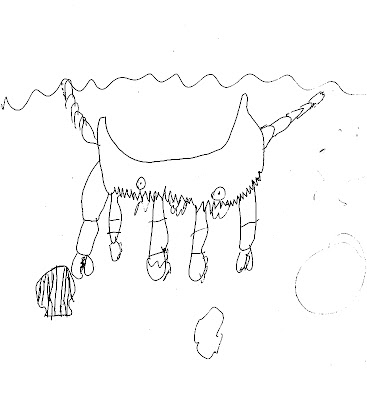 I only have one crab today but it is rather extraordinary.
Posted by Dr. C at 12:26 PM No comments:

Another "You can't make this stuff up"

He said God has made terroristic threats against the senator and his constituents in Omaha, inspired fear and caused "widespread death, destruction and terrorization of millions upon millions of the Earth's inhabitants." 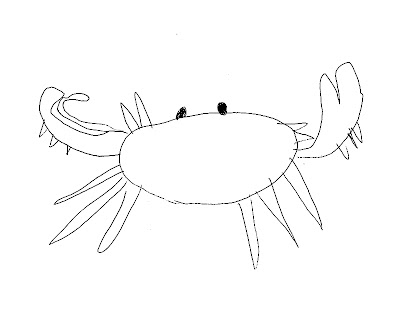 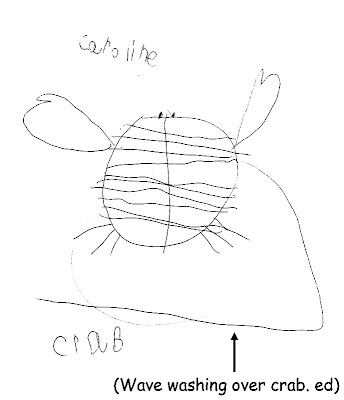 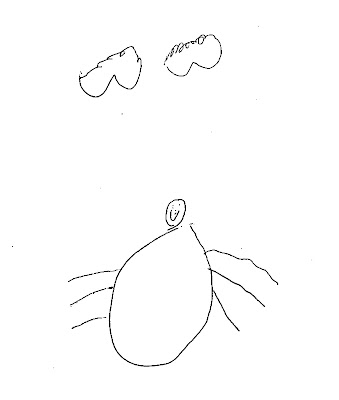 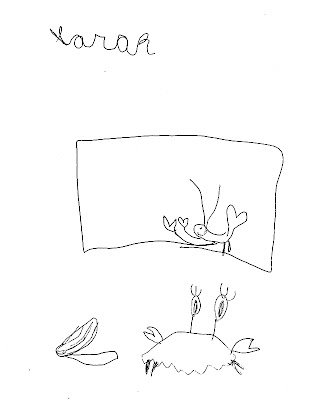 Children tend to anthrophomorphize. Check out the eye lashes. I am not sure what the other creature is. I guess it could be sort of a scorpion?? And, of course, a clam. 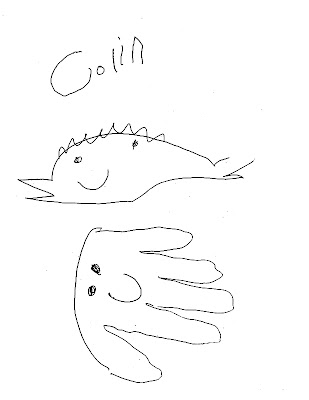 Another "You can't make this stuff up" 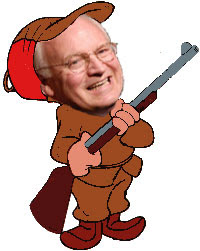 As all of you know very well, President Bush made wildlife conservation an early and a high priority of his administration. We’ve carried out that commitment in these eight years — and we’ve been proud to have people like you as partners in the enterprise.

The men and women in this room understand what conservation is all about. It means reverence toward creation, and a commitment to faithful stewardship. It means guarding our spectacular wildlife populations — not just for our own time, but for all time. 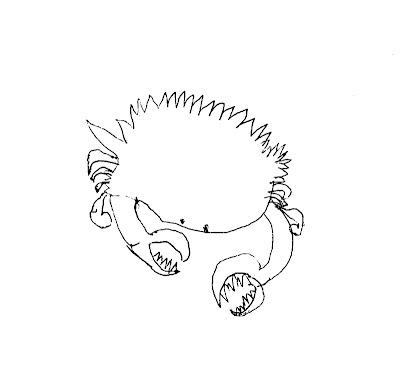 Not many crabs today but what I have is quite a good one. 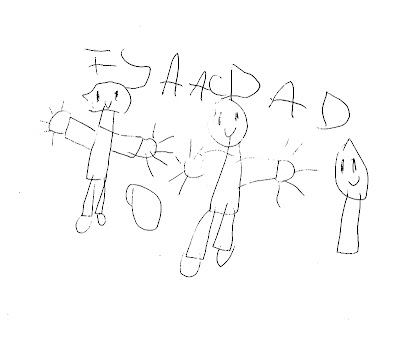 Most American children are normal. Many American adults are not. I am not sure when the transition occurs, or why.

I am very, very far behind on posts, particularly in response to the Growlery. I promise full reprisal.
Posted by Dr. C at 2:18 PM 1 comment: