A few things the Super Bowl says about America 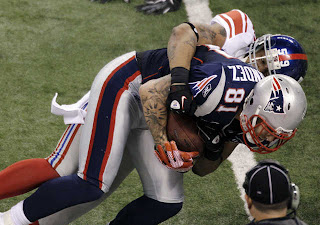 I don't have a television set, but I was invited to watch the Super Bowl last night at a friend's house. As happens with many people who don't have television in their homes and are constantly exposed, I was riveted to the screen. Habitual watchers seem to be able to multitask when the T.V. is on. I can't. I didn't watch the second half which, I am told, was quite exciting. However, I did make some observations:

The evening was imbued with violence. Even before the game, and at every conceivable chance during the game, advertisements for movies assaulted us with pictures of explosions, hurtling cars, crashing sky scrapers, and guns, guns, guns. These concentrated attacks of mayhem were viewed by millions of children. When something like this is so vivid, it becomes reality for children (I say this from experience recalling when I first saw Disney's Snow White as a child and the discussion amongst adults about whether the evil queen was too terrifying for us wee ones. She was. )  If one remembers for the moment that Obama is trying to negotiate peacefully with Iran to stop another disaster in the Middle East, you have to wonder what kind of message about the use of violence we are sending to susceptible minds. (I am avoiding the whole discussion about the importance of the engendered fear inspired by fairy tales like those of the brothers Grimm.)

Children also accept the violence on the field where over muscled men clash at terrific speed. These same children try to emulate this in their on play and this accounts in part for the dramatic increase in concussions that we are seeing. It seems that the whole point of this being a "ball" game has been lost.

Tattoos are ubiquitous among athletes. It used to be that such body art was only seen in the State Fair where it was classified with the other "freaks." Thankfully, we have put to rest entertainment based on unfortunate genetic malformations, but the tattoos have spread widely. I suspect that there would also be piercings on these players if it didn't pose a potential for ripping out the piercing by the opponent. One has to wonder what is going to happen to these men in 10-15 years when they want all this ink out of their skin. I understand that treatment, is very painful and only partially successful.

People love violence. We would hope that adults would be able to separate out violence experienced second hand from their own lives. I am not so sure. The report of a man setting fire to his house and killing his two children and himself this morning, in addition to the persistence of violence from small guns in the United States may be, in my opinion, closely linked to the ceaseless display of violence on television and, overwhelmingly, in the movies. But, then, people have always loved violence as in the portrayal of gladiators above.

One should also comment on the extraordinarily elaborate half time show. It was a perfect reflection of our mass culture and, as such, was frightening to behold. I'll leave it at that.
Posted by Dr. C at 1:59 PM 15 comments: