The Effect of War on Children 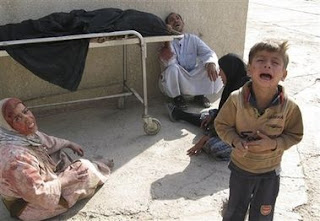 From Gorilla's Guides via The Liberal Avenger:

IRAQ: Children with serious illnesses abandoned
BAGHDAD, 21 November 2007 (IRIN) - Nine-year-old Faleh Muhammad was abandoned by his family in April 2006. He was left to fend for himself in the streets of Baghdad, and later he was diagnosed with leukaemia (picture above is not of this child.)
................
“The problem is even more serious among new-born babies and there are many cases of children aged 1-12 abandoned,” said Mayada Marouf, a spokesperson for KCA. “Most of them have a life-threatening disease and their families cannot afford treatment.”
................
Over 1.6 million children under the age of 12 have become homeless in Iraq, according to the country’s Ministry of Labour and Social Affairs. That’s almost 70 percent of the estimated 2.5 million Iraqis who are homeless inside the country.

Let me just add that a child who had leukemia diagnosed at a late stage has dramatically decreased chance of survival.

But, I forgot, Paris Hilton is out of rehab and engaged to Brittany Spears. And they are still looking for that missing white woman in the Caribbean.
Posted by Dr. C at 12:54 PM