There is a cholera epidemic in Iraq. In my opinion, this has been well documented by Gorilla's Guides from which I have taken this map of the current distribution of the disease: 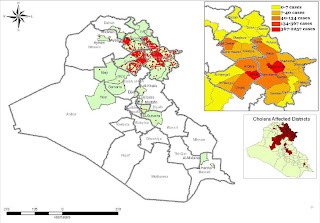 And from the WHO here:

Between 23 August and 10 September 2007, the cumulative number of cases of acute watery diarrhoea reported from Sulaymaniyah province stands at 6,142 including 9 deaths (case fatality rate, CFR: 0,14%). Of these reported cases, Vibrio cholerae has been laboratory confirmed in 392 stool specimens.

Pretty awful, you will say. Just one more insult to the Iraki people. But why haven't we heard about this? I mean, after all, it is a major epidemic in a land where we hold the power. (Any contention that Irak is being governed by its "government" went out the window a long time ago and has only been reinforced by the inability of that "government" to deal with the slaughter of Iraki civilians by Blackwater and Otherwater mercenaries.)

Cholera is a disease that is transmitted in contaminated water as described by John Snow in London in 1854. Although apocryphal, it is said that they stopped the epidemic by taking the handle off the "Broad Street Pump." With the advent of chlorine treatment of water, there has been little or no cholera in countries that use this for many years. Irak, of course, being a relatively advanced land before our invasion, chlorinated the water in its larger cities. This chlorine was transported by rail and trucks. 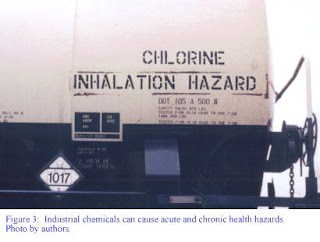 Insurgents discovered that blowing up a chlorine truck was a particularly nasty way of delivering a suicide bomb with many people dying from the escaped chlorine (this is an incorrect statement; see below).

This led, of course, to the American Military interdicting the trucks as they tried to cross the border into Irak.

It is long past time for America to leave Iraq.

UPDATE: Commenter Dubhaltach from Gorilla's Guides(who has expertise in this field) has corrected my statement about civilians dying from this particular toxic gas escape:

Nobody died of chlorine poisoning during any of those attacks. Many people were poisoned and made ill - but nobody was killed by the chlorine. In that concentration you would have to be in a relatively enclosed space for the chlorine to kill you

Technical note - this my specialism after all :-)

Nobody died of chlorine poisoning during any of those attacks. Many people were poisoned and made ill - but nobody was killed by the chlorine. In that concentration you would have to be in a relatively enclosed space for the chlorine to kill you.

The effect was psychological - it is very hard to explain this to people who are not Iraki. But I will try - I grew up as a westerner whose father was posted in mostly two countries Lebanon and Irak - that's were dad was and as my mother was deceased it made sense.

In Irak we were in the southern governorates bordering to Iran. I think I do not know anyone who either had a family member or a close associate who didn't see gas. It was used extensively in the Iran Irak war by both sides, so it is not just Anfal. Irakis know what a horrible weapon Mustard gas and some of the other agents are. Even I who am not Iraki feel a cold wind go over my back when I hear of a gas bombing.

Rationally I might know what I have just said to you - that has nothing to do with it. If you actually see some of the people who survived it then gas weapons fill you with dread and terror.

I went and did some digging both in the Arabic coverage and the English and all of the bombs were very powerful. The one I remember best was the Al Bayt bombing because there are very many schools near there. So there were a lot of casulaties.

Most of the Arabic coverage got it right and most of the English language coverage got it wrong. I find that interesting mostly I think it is because foreign (non-Arabic) reporters can't travel anywhere in Irak without being in extreme danger.